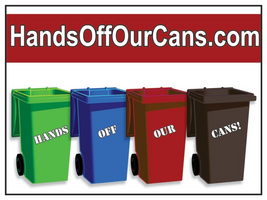 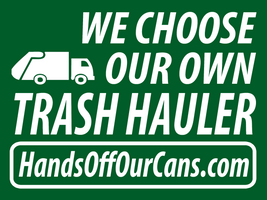 Q: Where is the Appeals Court ruling from October referenced in Trash Talk dated 10/30/18?

A: View the Appeals Court ruling

Q: Where is the memo from Public Works Director that was referenced in Trash Talk indicating Organized Collection will not bring significant benefit?

A: It is located on our Petition Update page

Q: I just received a mailer asking me to sign a new petition. I have already signed a petition last summer. Do I have to sign it again?

A: On December 21, 2015, the City Council voted 7-0 to change city law to allow Government-Controlled Trash Collection. This new petition is a "Referendum" to overturn this action and force them to put it on the ballot. Yes, this new petition needs to be signed and it is different from the one you singed last summer.

Q: What does the petition we signed last summer mean?

A: We were proposing that city first seek voter approval prior to making changes in the solid waste collection system. Simply put we wanted the citizens to have a voice in the process by placing this on the Ballot for the citizens of Bloomington to decide if they want government managed trash collection. City Coucil did not hear us and we sued the city. A decision from the judge is pending. Despite this the city decided to move ahead and on Dec 21, 2015, they changed the law.

Q: What is the difference between Initiative, Referendum, and Recall?

A: There is much talk from the Mayor, Council, City Manager & City Attorney regarding a Referendum.

Let's set the record straight. There is currently NO REFERENDUM at this time, but rather two (2) Initiatives.

One for an Ordinance and the other for a permanent change to the City Charter. And nothing the City Council does on June 22nd, or any other night, will have any effect on your right to have your voice heard through the Petitions for Initiative.

Do not be misled by incorrect language, no matter whoes mouth it comes out of. Bloomington's Charter affords its citizens, Initiative (to initiate), Referendum (refer to) & Recall (to remove elected officials)

SEC. 5.01. POWERS RESERVED BY THE PEOPLE

The people of the city can initiate and adopt any ordinance, except an ordinance appropriating money or authorizing the levy of taxes. When the council passes an ordinance, the people of the city can require referral to the registered voters for approval or disapproval, and they can recall elected public officials. These powers are called the initiative, the referendum, and the recall, respectively.

A procedure by which a specified number of voters may propose a statute, constitutional amendment, or ordinance, and compel a popular vote on its adoption. The general right or ability to present a new bill or measure, as in a legislature.

The principle or practice of referring measures proposed or passed by a legislative body to the vote of the electorate for approval or rejection.

The removal or the right of removal of a public official from office by a vote of the people taken upon petition of a specified number of the qualified electors.

A: Any registered voter that resides in Bloomington.

Q: How do I find out if I am a Registered Voter?

A: You can go to SOS Voter Status page to find out.

Q: How do I become a Registered Voter?

A: You can register by going to Voter Registration page.

Q: Can I sign the petition electronically or Online?

A: According to Bloomington City Code the petition must be signed using a pen and paper so please contact us or attend a signing event. Petition can not be signed electronically or on-line.

Q: How do I volunteer to collect signatures on the Petition?

A: We'll be happy to have you as a "block captain" and collect signatures. Of course there will be short overview/training process for this. Please let us know if you are interested in helping us gather some signatures by completing the form below or e-mailing us at info@HandsOffOurCans.com

Q: What can I do after I sign the petition?

A: You can contact the Mayor and City Council and keep reminding them that they need to listen to you. You want your voice heard and you would like to see this issue on the ballot. You are not in favor of Organized Collection. So, please send your councilmember and mayor your feedback.